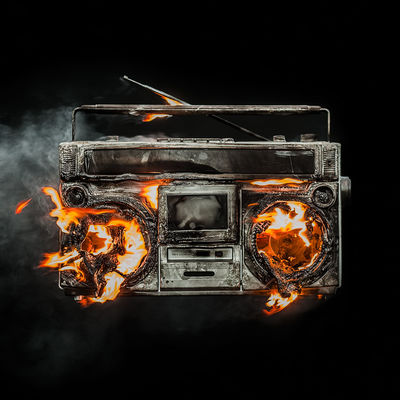 The title track for the 12th album from Green Day, “Revolution Radio” was released as a single on Sept. 9th 2016.

It continues, in the same line as the previous single, “Bang Bang”, lashing out against social media, but this time in a much more positive and anthemic instance.

Lyrics such as ‘Legalize the truth' and ‘Under the stars and stripes' channel the same anti-establishment rage that filled previous singles such as “Holiday” and “Minority”, while lines of the likes of ‘My love's bullet-proof' and ‘We are the songs of the disturbed' are direct reminiscent of the romance-fueled revolution that served as a theme for the band's 2009 rock opera, 21st Century Breakdown, from which the first single was “Know Your Enemy”, with a similar rhetorical and musical approach, as well as some topics.

Rise of the slums to the obsolete.

While a contradiction, giving orders to start rebellion seems to work as a topic for Green Day:

So rally up the demons of your soul.

There are similar images of police violence, for example in this line:

Give me rage like there's tear gas in the crowd.

And this one from “Know Your Enemy:”

The insurgency will rise,when the blood's been sacrificed.

Musically – and, obviously, lyrically and ideologically too -, it has a direct predecessor in the band's previous album, ¡Tré!, in “99 Revolutions”, a song about okupas, an anti-establishment movement that stood against land profit and the increasing amount of homeless people opposed to unused land and empty houses all around the world, but mostly in the US and Europe.